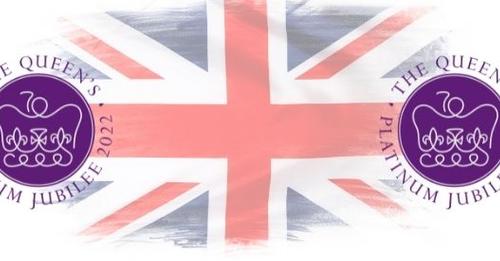 In June 2022 The Queen marks a milestone which few monarchs have reached – after 70 years’ reign she will celebrate her Platinum Jubilee. But what is the origin of the jubilee year? What do we know of its early beginnings and when did it become a Royal event?

The Bible states that after seven times seven years, the fiftieth year is a jubilee year: a time for slaves to be set free, lands given back to their former owners and fields to be left fallow. The trumpet which sounded at the beginning of each jubilee year was a ram’s horn and it is from this that the word jubilee derives. The Hebrew word for ram’s horn is jobel which, when the Bible was translated into Latin, became jubilaeus , influenced by the Latin word jubilare, meaning to let out joyful shouts. In French it became jubilé, and in English, jubilee.

As the new century began in the year 1300, many Christians travelled to Rome to seek forgiveness and a fresh start. As more and more pilgrims arrived in the city, Pope Boniface formally declared the year to be a jubilee year and agreed that any Christian who made the pilgrimage to Rome before the end of the year would receive pardon for all their sins.

Pope Boniface intended the jubilee to occur once in a century but it was repeated in 1350 and from the following century onwards it was held every 25 years, most recently in 2000. Today the Roman Catholic jubilee year is a time of reconciliation and forgiveness.

King George III was the first British monarch to mark his jubilee in a significant way. On 25th October 1809, lavish celebrations including processions, feasts and a 50-gun salute fired from the Tower of London marked the 50th year of his 59-year reign. A private service for The King and members of the Royal Family was held at Windsor and there was a grand fete and firework display at Frogmore House. In London, at St Paul’s Cathedral, the Lord Mayor and members of the Corporation attended a service of thanksgiving with a dinner at the Mansion House. Across the land, banquets were held in honour of The King, with food and money provided so that the poor and even those in prison could join in the festivities.

Before the time of George III several other monarchs had reigned for more than 50 years but few records remain of their jubilee years. However, one record mentions a grand procession in 1376, accompanied by trumpeters, starting from the Tower of London and culminating at London’s Smithfield where there was a week-long joust in honour of King Edward III’s 50-year reign.

Queen Victoria celebrated two jubilees during her long reign. Her Golden Jubilee took place over two days in June 1887 and began with a quiet but lavish breakfast at Frogmore, close to the burial place of her beloved husband, Prince Albert. On the same day she travelled by train from Windsor to London for a royal banquet at Buckingham Palace, attended by fifty foreign kings and princes and the governors of Britain’s overseas colonies and dominions. She wrote in her diary:

Had a large family dinner. All the Royalties assembled in the Bow Room, and we dined in the Supper-room, which looked splendid with the buffet covered with the gold plate. The table was a large horseshoe one, with many lights on it. The King of Denmark took me in, and Willy of Greece sat on my other side. The Princes were all in uniform, and the Princesses were all beautifully dressed. Afterwards we went into the Ballroom, where my band played.

The following day The Queen processed through the streets of London in an open landau with the magnificent Indian cavalry as her escort. Thousands of spectators watched from terraced benches along the 10-mile route. After a service at Westminster Abbey, The Queen returned to Buckingham Palace where she appeared on the balcony to be cheered again by huge crowds. Since her husband’s death in 1861, The Queen had largely retired from public life and this jubilee event proved to be the perfect opportunity for her to reconnect with the nation.

Ten years later, in the 60th year of her reign, Queen Victoria was the first British monarch to celebrate a Diamond Jubilee. On the day itself she attended a private service of thanksgiving at St George’s Chapel at Windsor Castle. Two days later she processed in her state coach from Buckingham Palace to St Paul’s Cathedral for a short service held outside the cathedral. The procession returned across London Bridge, through South London and back over Westminster Bridge and past the Houses of Parliament. The Queen was touched by the response of the crowds and wrote in her diary:

No one ever, I believe, has met with such an ovation as was given to me, passing through those 6 miles of streets . . . The cheering was quite deafening & every face seemed to be filled with real joy. I was much moved and gratified.

In 1935 King George V was the first British monarch to mark 25 years’ reign with a Silver Jubilee celebration. There were pageants, fetes and parties and The King and Queen Mary attended a service of thanksgiving at St Paul’s Cathedral before appearing on the balcony of Buckingham Palace.

Queen Elizabeth II marked the 25th, 50th and 60th years of her reign with Silver, Golden and Diamond Jubilees and will soon celebrate her Platinum Jubilee marking her 70th year.

The Silver Jubilee was a major event internationally as well as at home as The Queen and Prince Philip made jubilee tours to the Commonwealth and around the UK. After a year of visits and some 56,000 miles of travelling, they returned to London and celebrated her Jubilee Day on 7 June 1977. The Queen and the Duke of Edinburgh processed in the Gold State Coach to St Paul’s Cathedral, cheered by more than a million people along the route and a further 500 million who watched the proceedings on television. Across the country communities came together for street and village parties. Beacons were lit on hills and high ground: reminders of the time of the first Queen Elizabeth, when flaming beacons were an early warning of ships on the horizon as the Spanish Armada advanced, intent on invading England.

For her Golden Jubilee in 2002 The Queen and Prince Philip once again toured the UK and the Commonwealth. The day was marked with a concert at Buckingham Palace, followed by a firework display.

In 2012, the highlight of the Diamond Jubilee was a river spectacle in which a flotilla of 1,000 boats, led by the Royal Barge with The Queen on board, made its way along the River Thames from Chelsea to Tower Bridge. Jubilee lunches were held throughout the country and a 62-gun salute was fired from the Tower of London.

In 2015 Queen Elizabeth II became Britain’s longest reigning monarch, overtaking Queen Victoria’s reign of 63 years. June 2022 marks her 70th year on the throne and will be her fourth jubilee celebration. The occasion is extra special as she will be the first British monarch to reign long enough to celebrate a Platinum Jubilee.