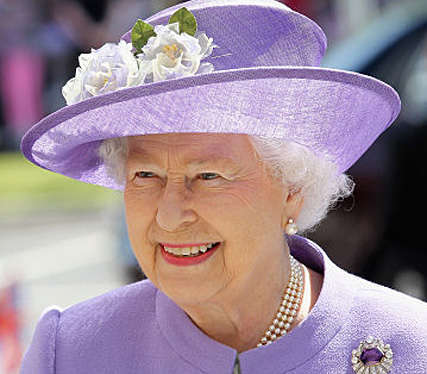 This year the Queen’s official birthday will be celebrated on 14th June, so you may be asking, “Why does the Queen have two birthdays and what is the difference between the two dates?”

The answer to this question dates back to 1748, when the Queen’s (or King’s back in 1748) official birthday was first celebrated. Edward VII, who reigned from 1901 to 1910, moved the celebration to the summer in 1908, the very same year Rose Calendars first began printing calendars. His birthday was on 9 November, so his decision to hold the event around the second weekend in June was made. It was hoped that by holding the ceremony in the summer months, that the weather would be fine, to allow optimum potential for celebrations.

Queen Elizabeth II’s actual birthday is on 21st April, so not being able to rely upon the British weather, the tradition of retaining an official day of celebration at a time in the year when the weather is supposed to be improved, has remained throughout her reign. In 2014 she celebrates her 88th birthday, and since her coronation on 2 June 1953, at the age of 25, she has reigned for 61 years.

Queen Elizabeth II is Head of State of the UK and 15 other Commonwealth realms. The date which is adopted varies by each Commonwealth country, but is usually around the end of May or the beginning of June.  In countries throughout the Commonwealth celebrations take place. A reception is hosted in Jersey by the Lieutenant Govenor or the public at Government House to, at which he announces the names of the recipients of Birthday honours.

In Canada,The Queen’s official birthday is marked by the firing of an artillery salute in the national and provincial capitals and the flying of the Royal Union Flag on buildings belonging to the federal Crown. The Queen was in Canada for her official birthday in May 2005, to mark the centennial of the entries of Saskatchewan and Alberta into Confederation. 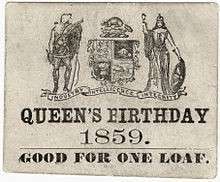 The Queen’s Birthday was celebrated in Fiji on 12 June 2012, when the military government of Commodore Frank Bainimarama announced the holiday would be abolished. The holiday had continued to be observed until then despite Fiji being a republic since 1987, following a second military coup d’état.

In New Zealand celebrations are mainly official, where the holiday is the first Monday in June. These include the Queen’s Birthday Honours list and military ceremonies, but proposals have been made with some political support to replace the events with Matariki or the Māori New Year.

In other places around the Commonwealth such as Gibraltar, The Queen’s official birthday is a public holiday. In 2009, the Government of Bermuda decided that the day would cease to be a public holiday, despite protests from people on the island, who signed a petition calling for its retention. In The Falkland Islands the actual birthday of The Queen is celebrated on 21st April, due to the seasonal shift. It is also a public holiday in Saint Helena, Ascension, and Tristan da Cunha, where it falls on the third Monday in April, and prior to the transfer of sovereignty to China in 1997, the date was marked as a public holiday in Hong Kong, observed on the second Monday of June.

In London, the day is celebrated with the formal ceremony of Trooping the Colour, also known at the Queen’s Birthday Parade. 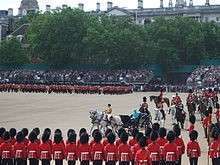 Held on Horse Guards Parade, as the clock on the building strikes eleven, the Royal Procession arrives and The Queen takes the Royal Salute. Before gathering on the balcony of Buckingham Palace to watch an RAF fly past, The Queen begins an inspection of the guards, traveling down the ranks of all eight Guards and the Household Cavalry.

With over 1400 officers on parade and over two hundred horses; four hundred musicians from ten bands and corps of drums, marching, pomp and ceremony come together for a display of precision and protocol second to none. The parade route extends from Buckingham Palace along The Mall to Horse Guards Parade, with The Queen now attending in a carriage rather than riding side-saddle, and wearing the uniform of the regiment whose colour was being trooped, which she did on 36 occasions until 1987.