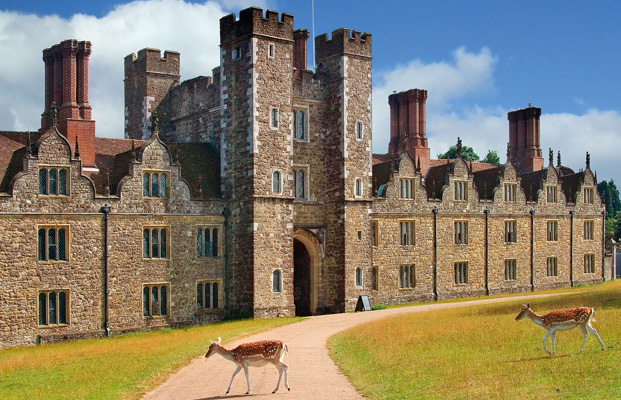 There are only a few ‘calendar houses’ in the UK and around the world. Houses built in this curious architectural style vary enormously in size and appearance, but the one thing they have in common is that their architectural elements correspond to numbers relating to the calendar: the 365 days, 12 months, 52 weeks and four seasons of the year, and seven days of the week. The concept came about in Elizabethan times and was a product of the fascination of the time for horology, astronomy and mathematics.

The first calendar house was built one year after the death of Queen Elizabeth I, in 1604. This was Knole House in Kent, said to have originally had 365 rooms, 52 staircases and seven courtyards. The house belonged to the Sackville family whose descendants still live in part of the house today. The estate is in the care of the National Trust and parts of this huge, rambling house are open to visitors, including the magnificent great hall and three long galleries leading to the state bedrooms.

Boughton House in Northamptonshire is another impressive stately home, now used for weddings and private events and open for guided tours at Easter and during August. The house was originally created from monastic buildings, but at the end of the 17th century it was rebuilt in French architectural style, with seven courtyards, 12 entrances, 52 chimney stacks and 365 windows.

Not all calendar houses are on such a large scale and one of the smallest is Scout Hall in Yorkshire, built in 1681 with 365 panes of glass and 52 doors. After standing derelict for around 30 years, the house is now in the process of being restored as a family home.

Although the calendar house concept originated with the Elizabethans, most were built in Victorian times. Holme Eden Hall in Cumbria was built in 1837 for cotton mill owner Peter Dixon, whose successful milling business at its peak employed 8,000 people. The Hall was in the style of an early Tudor mansion, with 365 windows, 52 chimneys, 12 passageways, 7 entrances and 4 storeys. In recent times it has been converted into private apartments and the architects continued the calendar theme by creating 12 apartments and naming each one after a month of the year.

From the same Victorian era came the romantic Balfour Castle, one of the most northerly castles in the world on the Isle of Shapinsay near Orkney. This beautiful building was remodelled in 1847 with 7 turrets, 12 external doors, 52 rooms and 365 window panes. Today visitors can book exclusive use of the castle with its dedicated staff and top chef. Guests arrive by private charter boat and come either for dinner or to stay for a few days of luxury and grandeur.

The most recent calendar house is Avon Tyrrell in Hampshire, built for the 3rd Baron Manners who is renowned for his unexpected win at the Grand National in 1882. Just four months before this event, Lord Manners bet that he could buy and train a racehorse, and ride it to win the Grand National. Despite his relatively little riding experience, in the last 100 yards he coaxed his horse, Seaman, into a burst of speed to win the race by a head. With wealth from his winnings, the Baron built his house in the Arts and Crafts style with 365 windows, 52 rooms, 12 chimneys and seven ground floor entrances, completing it in 1891. Now Grade I listed, it is an activity centre for young people.

It seems appropriate that pictures of the first calendar house ever built, Knole House in Kent, should feature on the pages of Scenic Memo PC74 and Countryside Walks PC422 Calendars for 2016.